Scotland Road, from its northern border with Orange to South Orange Avenue, will undergo a complete renovation starting in late spring of 2020. This comprehensive renovation will replace the water main along the entire road, add additional and replace some of street lighting, new paving, ADA upgrades, and several traffic safety improvements.

The Village sincerely apologizes and understands the frustration and difficulties you have had to deal with over the past 6 months of construction on Scotland Road. We know it has not been easy and appreciate your patience while we move forward with the improvements. Throughout this process the Village has had numerous complications which have resulted in setbacks forcing unexpected changes and project delays which now will continue into the future.

•   October 31 - November 4: UPDATE: Scotland Road Paving - The County's Contractor is preparing the street for paving today, October 31st. The paving will take 2 days and begin on Monday November 2nd. The work will start at 7am and will continue until 4pm. Work will not be done on Tuesday November 3rd, because of Election Day. The second day of paving will be on Wednesday November 4th and will also run from 7am to 4pm.

Regarding the raised intersection at Raymond Avenue, unfortunately, what was discussed and promised was deemed unsafe once the County’s Contractor and Engineer met the Village Administrator and Engineer. The slope of Raymond Avenue is too great to safely add a raised intersection. Understanding the goal of the raised intersection is reducing speeds on Scotland and being able to cross Raymond safely, we came up with an alternative that the Village believes achieves our goals. The Village is requesting that a raised table which would be located approximately 20ft before the crosswalks on either side be installed to create a safer crossing for individuals at the intersection while reducing speeds prior to the crosswalks.  We also requested a third raised table heading towards South Orange Avenue, slightly before Ralston to reduce speeds heading into the curves. Though this is all new, the Village believes it would achieve the goals of reducing speeds and creating a safer crossing.

Grooved pavement will be installed in the curved area leading up to the South Orange Library on the center line as well as the sides.

The Village will not be able to move forward with curbing along Scotland Road at this time as requirements of State historic standards have made this piece of the project more cost prohibitive than was budgeted for. Unfortunately, the County does not consider curbing as part of their responsibility for maintenance of the road and so all costs must be borne by the Village. Our proposal to the State to allow the Village to replace the bluestone with a more economical and maintenance friendly option of granite block, though still keeping with the historic look, was denied and the Village must therefore replace with bluestone.

We have already asked the County to push back the paving piece of this project for one year for the Village to complete the water main project and we must move forward with paving the road. The Village will continue to investigate opportunities to replace the bluestone, though at this time it must be done in a future project.

On a positive note, we have accomplished a great deal of work including replacing almost one mile of 8" cast iron water main circa 1890 with a 12" Ductile Cast Iron with a protective liner that deters sludge and wear, including 60 copper laterals which included curb stops providing greater capacity and distribution. Installed strategically placed inline and intersecting side street valves for improved maintenance ease in the future. This Water project also replaced eight fire hydrants along the road.

Work to begin on October 20, 2020, click here to read the updated information from Essex County.

Click here to see the Mill and Overlay plan.

For the current phase ending 6/22 Scotland Road will be closed from south of Montrose Ave. to Ralston daily at 8:00am through 4:00pm.

South bound traffic should turn right at Montrose Ave. and proceed one block to Vose then turn left onto Vose until Ralston then left on Ralston for one block and then a right onto Scotland Road.

North bound traffic should make a left turn on Ralston and proced one block for a right on Vose to Montrose.

The following is the detour plan: https://www.southorange.org/DocumentCenter/View/2346/Traffic-Plan-Phase-IIa 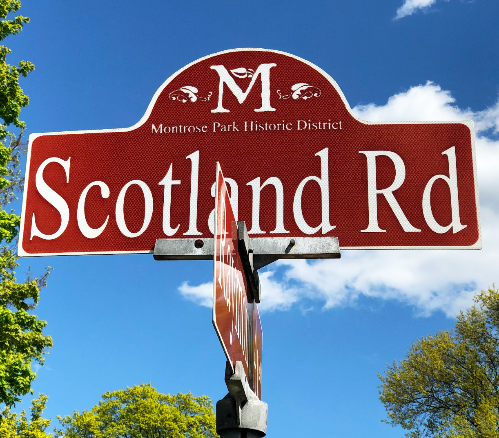 Detours and disruptions will be ongoing from May through Sept, 2020 so residents and travelers are encouraged to seek alternate routes and subscribe to the following information sources for regular updates.

Planned for the end of this week the contractor will install a temporary water main from Montrose to Ralston on both sides of the roadway along the resident side of the sidewalk including ramps at driveways. The temporary main will be sanitized and tested prior to being put into service. This process is projected to take five (5) days thereafter residences will be transferred to the temporary service. A 72 hour notice will be provided to residents prior to the transfer via hangtag placed at the resident door. There will be a short service disruption for the transfer. This process will be done in sections allowing removal of the old main and installation of the new main, sanitized and made ready to be put into service. New copper service lines will be installed to the new cubboxes and again a short service disruption to transfer to the new main.

Also in this section of Scotland Road electric conduit will be installed from the electric roadway manholes to handholds and lamp bases installed in the space between the curb and sidewalk in preparation for the new LED gaslamp look-alikes.

The South Orange Water Utility contractors will post hangtags on doors 72 hours prior to when homes will be directly affected. The timetable for the Essex County paving portion of the project is still not set but the South Orange website and social media will be updated with it when the county releases the information. More information and schedule updates can be found at http://southorange.org/653/Scotland-Road.

Long awaited improvements to Scotland Road, a county road in South Orange, will begin in early May with the recent award of a contract to Colonnelli Brothers set to break ground in late May to replace the water main that runs the length of the roadway. The South Orange Water Utility and their consultant engineering firm, HDR, will oversee the project with help from New Jersey American Water, the operator of South Orange’s water system. Together they plan to replace the 120+ year old water main while adding 39 new LED gas lamp lookalike street lights and improved curbing. When this phase is complete in August, Essex County will take over the remainder of the project that will include repaving of the road, grooved pavement on center lines and curve shoulders, re-centered lanes, shoulder striping, and crosswalk striping, ADA accessible intersections, ramps, and crosswalks, signage, and a raised intersection (speed table) at Raymond Avenue to help slow traffic. As a finishing touch South Orange will plant up to 50 street trees along the route to further improve the aesthetics of one of its busiest corridors.