Description: The Norway rat is the largest of the commensal (i.e., living in close association with humans) rodents. The head and body are seven to ten inches long and the tail is an additional six to eight inches. It has a stocky body and weighs seven to 18 ounces. The fur is course, shaggy, and brown with some black hairs. The muzzle is blunt, eyes and ears are small, and the tail, which is bi-colored, is shorter than the head and body combined. Norway rat droppings are up to 3/4-inchs long with blunt ends. 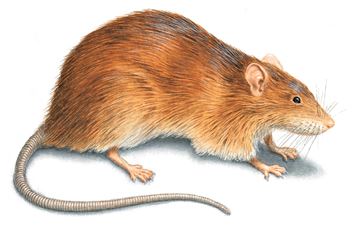 Biology: Adults are sexually mature in two to five months. Females produce three to six litters per year, each averaging seven to eight young. Adults live from six to twelve months. They have poor sight but keen senses of smell, taste, hearing, and touch.

Habits: Rats are nocturnal. They are shy about new objects and very cautious when things change in their environment and along their established runs. Outdoors, Norway rats prefer to nest in burrows in the soil, e.g., under sidewalks and concrete pads, stream/river banks, railroad truck beds, next to buildings, in low ground cover, etc. The burrows typically have one main entry hole and at least one escape hole. The rats easily enter buildings through 1/2-inch and larger gaps. In buildings, they prefer to nest in the lower levels of the building, e.g., crawlspace, basement, loading dock and sewers. They prefer foods such as meat, fish, and cereals and require a separate nonfood water source. Their foraging range is 100 to 150 feet from their nest. Rats are associated with various diseases and occasionally bite. Plague is of little concern because it has not occurred in rats in the United States for many years. However, leptospirosis is vectored by rats, and, thus, is a disease of great concern. This disease is acquired by eating food and drinking water which are contaminated with infected rat urine. Rats also cause significant structural damage and product destruction.

Control: The keys to a successful program of rodent control are identification, sanitation, elimination of harborage, and rodent proofing.  The inspection should identify signs of infestation, e.g., grow marks, droppings, tracks, burrows, rub marks (i.e., dark greasy spots left where the rats rub against surfaces), runways, damaged goods, etc. Sanitation consists of removing food, water, and materials which provide harborage. Stored goods should be at least twelve inches off the floor and eighteen inches away from the wall.

Rats can be trapped using glueboards and snap traps placed along walls and near vertical runs where the rats travel. Traps can be baited with fish, meat, and cereal, or they can be left un-baited. Because rats are wary of new things in their environment, it may be helpful to leave the traps unset for a while.

Exclusion is a critical aspect of rodent control. Since rats can squeeze through a 1/2-inch gap, anything larger must be sealed. Since they can chew holes, sealing smaller holes should be considered. Sheet metal, cement, 1/4-inch hardware cloth, expandable foams, etc… are the materials of choice which can be used for this service. Door sweeps should be installed around gaps on doors, windows, and other openings.

Several anticoagulant rodenticides are available as pellets, pockets, and blocks. When baiting indoors, these products should be placed in tamper resistant bait stations and in areas which are inaccessible to children and pets. Outdoors, pellet baits can be placed deep in the burrow using a long handled spoon and then the burrow should be dosed. If packets and blocks are used in burrows, there is a risk that the rat will push the product outside the burrow. When water sources are limited, liquid anticoagulant baits are very effective but must be handled in the same way as dry baits. Tracking powders are also available which contain either an acute single-dose toxicant or anticoagulant active ingredients and typically are used to dust burrows and runs. Using gas in outdoor burrows is an option but is risky particularly if the burrow extends under or into a structure.
It would be safer to hire a licensed pest control company.

The key to a successful rodent control program is identification, sanitation, elimination of harborage, and rodent-proofing. The foraging range for the Norway rat is 100 to 150 feet from their nest. If bait is applied it would be safer to hire a licensed pest control company.